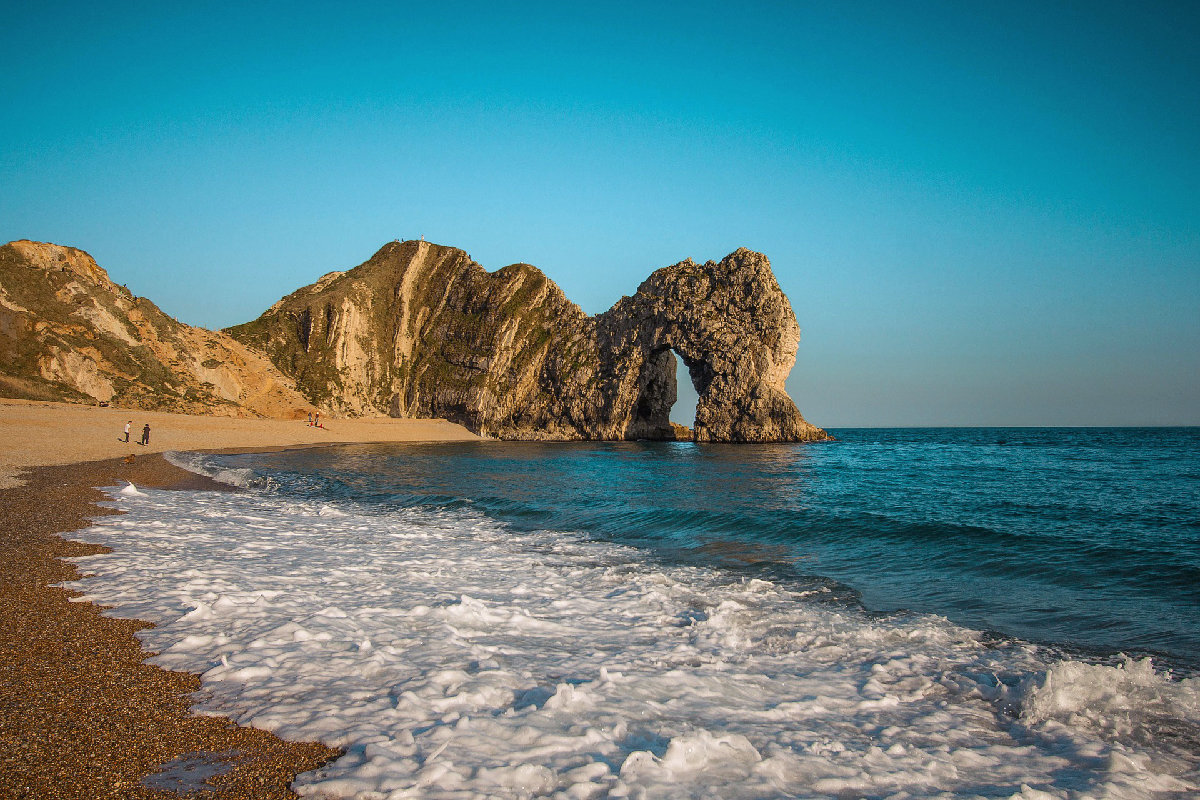 When you think about Dorset, you probably think about the Jurassic Coast, a stunning beautiful coastline with rocks recording 185 million years of the Earth’s history. You think about beautiful cities at the sea like Poole and Bournemouth, picturesque villages such as Milton Abbas, you think about Lulworth Cove, the wonderful Durdle Door (which is our featured image), Corfe Castle and the South West Coast Path. The beauty of Dorset is legendary and there is no doubt it is one of the top destinations for a UK holiday. Not commonly known is that Dorset is also famous for retro computers. Whenever you’re using your beloved Future was 8-bit SD2iEC, you should keep in mind that it was handcrafted at one of the world’s most lovely places. The company is run by someone who introduces himself as Rod Hull. Even though he vigorously remarks he actually is Rod Hull, you might be not surprised to find out he is not. I don’t even think he is interested in football.

His name is Nic and it’s no secret that we know each other. We met on Twitter quite unspectacularly as many other people do every day, and we share pretty much the same sense of humor and the same love for retro computing. So from an initial purchase of a SD2IEC, because that is presumably how it all began, we continued writing each other, then talked on Skype and then became good friends. We eventually started sending free kit across the sea, which regularly results in the famous unboxing ceremonies you see on our Twitter accounts.

Sometime in 2015 talks for a visit started. We both liked the idea and I was very interested to see where Nic lives and of course how the SD2IEC and the Epyx Fastload Reloaded get assembled. Have I ever told you that the name “Epyx Fastload Reloaded” was my idea? I probably have. Anyway, there you go.

One should think that it is quite easy getting from Berlin to Dorset, right? Because from Berlin you get anywhere? I actually thought the same and I was even more surprised to find out that it’s not true. The airports of Southampton and Bournemouth are not available as direct connections from Berlin, so I had to fly to Bristol, which is about an hour by car from Nic’s place. And even though I arrived safely, Nic ensured me we just had luck because in Bristol they eat their young. I’m not so sure about that to be honest. One hour enjoying Somerset’s beautiful landscape wasn’t a bad side-effect either.

So after some super-delicious Fish & Chips and a can of Vimto Fizzy we finally arrived in Blandford Forum, which shall be known from this day as the home of the SD2IEC. The locals commonly call it Blandford. If you’re into insects, you probably heard about the Blandford fly, though that is a story for entomologists and I remarkably were not bitten. Actually, people bitten by the Blandford fly became a rare phenomenon in Blandford. On our arrival, we were warmly welcomed by Bernard the dog and Spartapuss the cat. I’d like to clarify that Bernard is a lady, so the name may (or may not) derive from Bernadette. Nic even sings a “she’s the dog called Bernard” song when he is walking her.

Somehow I was rather hazy about how Nic’s house would look from the inside. There are collectors who passionately pursue their obsession in a single room, which basically resembles the collector I am and on the other hand there are people who chaotically store their items all over the place. I was delighted to find out the latter wasn’t the case at the “Future was 8-bit headquarter”. The house is quite big and yes, some rooms are full of collectibles and 8-bit wonders. The SD2IEC workshop is such a room as you can see on the picture to the left.

I was stoked to play with one of the C64p prototypes. He doesn’t build these machines anymore. Even though the C64p is one of the best gadgets I’ve seen in years, the building process is very time consuming, which basically is the reason why you most likely won’t get the opportunity to buy one in the future.

It’s safe to say I’ve never seen a wall of CRT monitors like this before. Everything is connected to a specific machine and can be launched by pressing a button. If I’d say I’ve been impressed, that would be an understatement. There were some other rooms containing old computers and peripherals and there were rooms that didn’t contain retro kit at all: the living room, the bathrooms and the kitchen for example. Ok, ok… maybe there was a tiny little bit of retro kit in the kitchen, like several C64 cases in the dishwasher and a Microvitec Cub monitor next to the microwave, for whatever reasons. You had to look twice to notice it, so I’m tempted to say that’s fine. The same goes for the guestroom, where I slept very comfortably. If you opened the drawer underneath the guest bed, you had the pleasure to stare at a lot of roughly twenty C64C units, which isn’t bad either. I expected lots of retro computers on this trip and this is exactly what I got.

One of the major highlights was seeing how the SD2IEC is being built. I was not aware it is handwork. Nic could have everything assembled elsewhere, but since he has some clear quality expectations, there is no way of moving production to China. Each of these wonderful devices gets thoroughly tested before it is shipped to the customers. And that is what we expect from a high quality product like the SD2IEC.

The company, that’s doing the cases is notably just around the corner. I was very interested to survey the commodity of the limited Edition SD2IEC. We all know these cases are made from remoulded Commodore plastic, donors are bread bin C64, C64C and now VIC20 machines respectively. At this point I can safely say: the donors are the worst looking, broken machines I have ever seen. Cracked plastic, multiple holes, burn marks from cigarettes, bucketfuls of paint and that is just the tip of the iceberg. I know I used to do some jokes on Twitter about the matter, and of course I still do when I call him El Grindo, but you know, actually it’s quite unfair. He really does a good job in finding the right donors that every single person on this planet is perfectly fine with. Anyway, don’t tell him I said that.

Same goes for the Epyx Fastload Reloaded cartidge. Everything is assembled in Dorset and tested before it is send to the customer. I’m rather impressed by the passion and devotion Nic is putting into his work, which is rarely seen in today’s profit oriented world. He is always willing to listen to the community, whether it is for improving the SD2IEC or for new product releases like the upcoming Penultimate Cartridge for the VIC20. There is also a divIDE-like interface for the ZX Spectrum in the works. See it as a device similar to the SD2IEC but for Speccy. It’s no secret I’m really in love with the Spectrum, so I am looking forward to that one and I’m confident it will come with the same quality TFW8B products are known for.

I can safely say that this was the best holidays I’ve ever had in my whole life. Probably the mix was really making a difference here. We spent the days discovering most of Dorset and we also did some awesome trips to Somerset and Wiltshire. In the night, we played around with old computers, assembled or disassembled stuff and we really had a great time. Nic is a very funny person and his humor is outstanding, not to mention it’s pitch black as well. I remember us standing in the local Fish and Chips shop and we’ve been asked what made me end up in Dorset. His official statement was: “The Germans invade again.”

I’ve taken many great memories with me and some of the spots we visited really overwhelmed me. Have you ever heard of Woodhenge? It’s not far away from Stonehenge and another so-called Neolithic Class circle monument. Mike Oldfield even did a song about it on the Platinum album. I did not know what to expect there, and with epic standing stones in mind, which is the first thought one might have after hearing the word “henge”, you’d be surprised to find out it looks totally different. Nevertheless it felt great visiting this sacred, mystical place. We even visited old churches and graveyards, like this one near Tarrant Crawford and right in the middle of nowhere. We had lots of trips to the sea, of course. I surely never forget Durdle Door and I definitely want to see it again. I already declared my interest in visiting Nic a second time and he willingly muttered something like “oh the horror”. Don’t expect that to happen before 2017 though. Until then, we patiently wait for some new, awesome Future was 8-bit products to arrive. While we’re on it: go ahead and preorder the Penultimate Cartridge for the VIC20. Face the facts: there are literally no chances getting a Mega-Cart since it became the greatest piece of vaporware I’ve ever seen. The Penultimate Cartridge is another good deed for the community (and probably just a little bit for his wallet, too). Anyway, who cares? Good stuff needs to be bought. It’s that easy. It really is. In case you ever decide to visit Salisbury, do yourself a favour and never buy Fish and Chips there. You know who you are, Roxy. Don’t you? And after so many wise words just keep the one thing in mind that you really learned for life today: in Bristol, they eat their young. 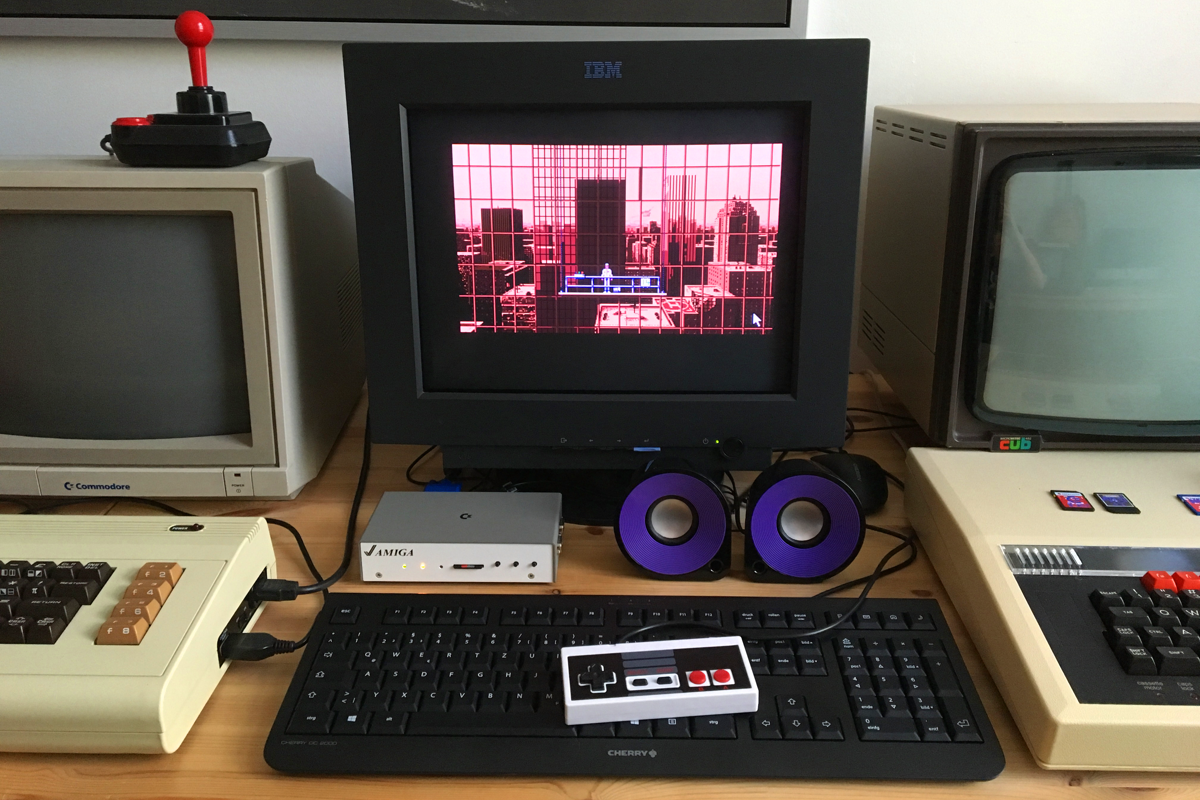 MiST(y) journey to the past